At the end of 2015, followthethings.com CEO Ian Cook gave a talk explaining why we re-create scenes described on our website it LEGO, what our shoppers like about them, and what they add to our scholar-activist work. That talk was filmed and you can watch it below. He talked through a series of re-creations made in response to the controversy provoked by a TV documentary film called ‘Primark on the rack’ that was first broadcast 2008, and re-energised by Primark’s response to the Rana Plaza collapse in 2013. It draws upon the work of Political LEGO artists like legofesto, whose conversation with Julia Zielke we published a few months ago. Ian’s talk outlines the argument being made in an academic paper he’s currently writing. Think of this talk as its Trailer….

END_OF_DOCUMENT_TOKEN_TO_BE_REPLACED

Last year we co-ran the Idea Zone at the Geographical Association conference in Guildford. We filled a table with Lego for delegates to recreate scenes described on our website. We set up a card table to make a play our Ethical Trade trump card game. And a Nottingham PGCE student called Hannah Campion brought along some lesson plans, teaching materials and student work showing how she’d used our site and classroom resources to develop a lesson series about ‘The Geographies of my Stuff’.  She was asked if she’d be interested in writing a short paper about all of this in the GA’s Teaching Geography journal. It’s just been published, and here’s an extract. 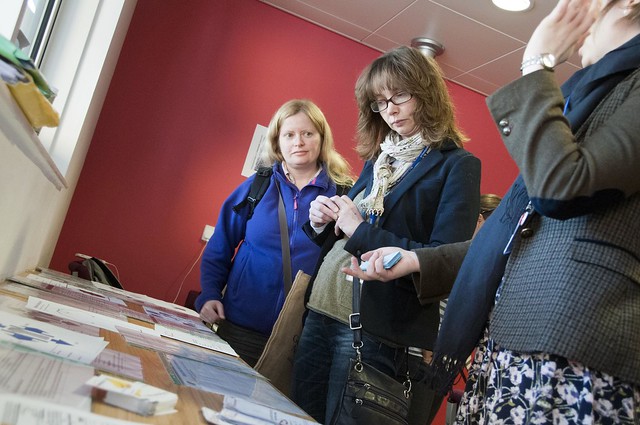 Hannah talks to delegates about her lesson plans, materials and student work.

“… My five-lesson sequence was developed for year 8 and followed on from a year 7 unit, ‘The Geography of my Stuff’. I wanted to develop students’ ability to investigate and critically reflect on the hidden connections which link them to often distant global communities, and to empathise with the people who live and work there. To do this, I chose a familiar but often untraceable commodity which students could easily identify with – a plain white T-shirt. … In the first lesson we used a ‘who, what, why’ starter, with images of horses, clothes and the Rana Plaza factory collapse to stimulate students’ curiosity. … Lesson 2 introduced the £4 T-shirt as the commodity to be investigated.  After we had covered the role of the first link in the chain, the cotton farmer, the main activity required students to explore, in groups, ‘How much of the £4 should x get paid?’ …  Lesson 3 focused on manufacturing and worker conditions. The enquiry question was: ‘Who was to blame for the Rana Plaza collapse?’ … Having helped students to step into the shoes of ‘others’ and investigate the structures and processes of the clothing industry, in lesson 4 we focused on the ethical standards of global retailers. The class was divided into two groups, representing H&M and Primark … [and] students played the Top Trumps game to compare multiple retailers. … [Finally] The assessment activity was to produce a newspaper article … entitled ‘Behind the seams… the story of a £4 T-shirt’.” 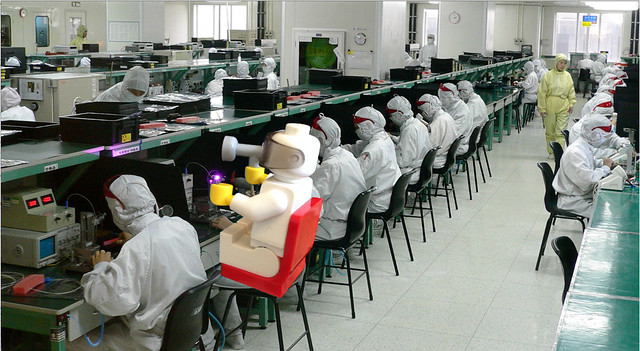 Here’s the latest of our Lego re-creations, made today to add to one of our first published pages: on Melanie Jackson’s (2006) digitally generated animation (and catalogue) A Global Positioning System.  END_OF_DOCUMENT_TOKEN_TO_BE_REPLACED

END_OF_DOCUMENT_TOKEN_TO_BE_REPLACED

In 2011, we spent three weeks making things out of Lego with our summer interns.

We started off by the live tweeting of our Lego Maersk container ship and ended up re-creating scenes from different followthethings pages in Lego.

This week, we ran a Lego Lab at the Annual Conference of the Geographical Association in Guildford, in the UK. We have found Legoing to be a fantastic way to imagine and appreciate the relations what our site describes, and also to discuss the issues it contains in toy form.

We’ve also asked people about their favourite things, what they like about them, to imagine someone somewhere who made them for them, and then to write down what they would say to that person if they had the chance.

So, what happens when you combine these two approaches: ask people to think of a favourite thing, imagine who made it, and then Lego that imagination?

That’s what happened on the last day of our summer 2012 Lego Lab, when 11 year-old Ruby did this for her favorite dress. We asked for one scene, but she made the stop-frame animation – pictured above – of the whole commodity chain. It’s quick…

This is one way to imagine an answer to Fashion Revolution Day’s 2014 question: who made your clothes? And we’re publishing it today in advance of the first anniversary of the Rana Plaza factory collapse. 24 April. Try it yourself!

Buying gifts to give to loved ones presents unique dilemmas to those who are concerned about who made them, under what conditions. Can you express your love for another person by buying them conflict jewelry, or child labour chocolate? And what are the alternatives?

If you’re looking for resources to help creatively discuss the controversial issues in Valentine’s Day supply chains, here’s a selection.

END_OF_DOCUMENT_TOKEN_TO_BE_REPLACED

At a packed followthethings.com 2013 award ceremony last night at the University of Exeter (entirely made from Lego), actor Daniel Radcliffe presented the awards.

END_OF_DOCUMENT_TOKEN_TO_BE_REPLACED

Talking about our site with students at Bath Spa University this week, I wanted to show the most literal (and chilling) example of the ‘follow the things’ genre. It’s the only example we have come across which follows something as it’s being made, shipped, and used: telling the story of a thing’s life from the perspective of the thing itself, from its ‘point of view’, like a ‘shoot-em-up’ video game. It’s the ‘Life of a bullet’, the opening scene from the 2005 movie ‘Lord of War’.

Life of a bullet

Revisiting this opening scene, we made a new Lego re-creation today using the decommissioned AK47 bullet that we bought as a necklace from an E-Bay seller in Canada. We initially bought it to take the product photo on this example’s followthethings.com page, but it’s still sitting in our office, with our Lego, so…

Our page about the making, discussion and impacts of this opening scene is here. To see all of our Lego re-creations, check this ‘Made in Lego’ set on flickr.

Yes. A story appeared in Gizmodo today saying that, 55 years ago, Lego bricks were first patented. We are interested not only in their origins, but also in their powers…

For the most part, Lego is one of the great levelers in the toy world: kids love it, adults get excited about it, and you can build practically anything you like out of it. While most wholesome family fun turns out boring or desperate, Lego transcends age and gender and makes everyone want to play.

Here at followthethings.com, we use Lego for our own means,re-creating scenes from ‘follow the things’ examples showcased on our site, posting them on Flickr and hoping that they will generate interest in our site. See a sample from our Flickr set in the right hand column of our blog.

What the Gizmodo article includes is one of Lego’s earliest commercials, in German, illustrating its playful, leveling effects… Enjoy!