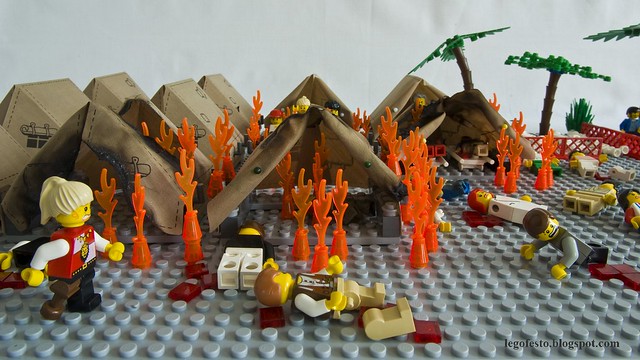 We re-create scenes from the trade justice documentaries, art and activist work in LEGO. We photograph them, put them online and embed them on our site’s pages. You can see what we’ve done here. This work was inspired by LEGO scenes from the ‘War on Terror’ produced by a person calling herself Legofesto. We read interviews with and articles about her that were published in 2009, but hadn’t found anything since. This year, after teaching Political LEGO on the MRes Critical Human Geographies at Exeter University, one student – Julia Zielke – emailed Legofesto to interview her for an essay. What questions hadn’t been asked in those 2009 pieces? What had Legofesto been doing since then? Can we expect any new Legofesto work? This is what she said… END_OF_DOCUMENT_TOKEN_TO_BE_REPLACED

On a much smaller budget, we’ve been making, photographing and posting online re-creations in Lego of (imagined) scenes from trade justice films, art and activism for a while now. See, for example, our recreations from and around the BBC Panorama documentary ‘Primark on the rack’. END_OF_DOCUMENT_TOKEN_TO_BE_REPLACED