This is the latest in our #followtheteachers series. In December last year, Ian was contacted ‘out of the blue’ by Joe Lambert, a trainee teacher at Montgomery Primary School in Exeter who had been an undergraduate Geography student at Exeter University, where Ian works and where followthethings.com is based. Would Ian be interested in working with him and the school’s 7-9 year old (Year 3 and 4) students, who were following food the following month? Yes was the answer. Here’s what happened, as described by Joe. 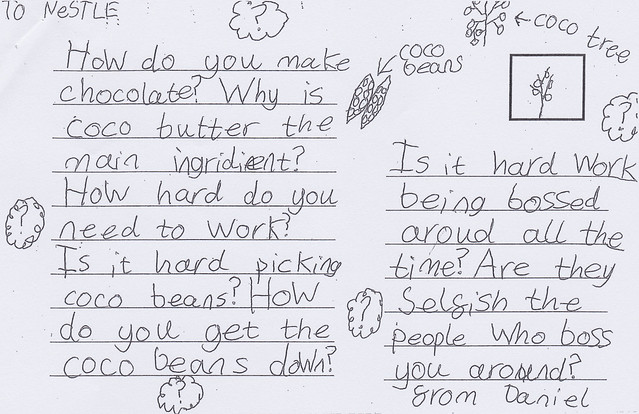 After hearing geography was the key focus of the first few weeks of the January term, my ears immediately pricked. A geography graduate rarely gets an opportunity to use his degree but when he does you know he is going to relish it! My interests were further stoked when the topic was narrowed to identifying where does our food come from? This was the wonderful, crystallising moment when you realise maybe paying attention in the 1st year of your degree was worthwhile.

Initial ideas and reasoning for project

I know that from my own experience of primary geography it was very rare to stray too far from colouring in maps, however I feel this massively undersells what the subject has to offer for children Geography has a fantastic way of stripping a subject back to its rawest elements and exposing some of the funny, provoking and painful truths of human life. Although these truths may be uncomfortable, they can stimulate powerful reactions, reactions that can motivate, inspire and change. As a PGCE student I strive to create innovative learning experiences for children that will be memorable. Experiences that will promote discussion, result in interesting work but most importantly leave the children with a message. Using the topic of researching food as a jumping off point, I looked to extend the children’s knowledge of food production past a rudimentary understanding of where it comes from and onto the undeniable human experience of food manufacturing. It seems as though the rest of the world viewed this topic as too controversial or upsetting for primary aged children to be learning as the amount of online resources available were scarce. I, however, disagreed (see Barlow 2012). Children have a natural propensity for empathy and are unburdened by cynicism, allowing them to express true emotional responses to harder hitting topics. By showing children this kind of content, I hoped to produce emotive thoughts and reactions that could be recorded and shown on a wider platform. When I initially approached Ian with the idea of adapting the ‘follow the things’ approach for a primary-aged audience, I thought it was a bit of a pipe dream. The followthethings.com website includes lots of teaching resources and ideas for secondary school use, but nothing for primary. So I held a glimmer of hope that he would want to develop the thought.

Ian and I met up and we hashed out some basic ideas for the project. After talking about the lack of primary aged resources

for food production, we agreed that children deserve to know the truths about their favourite foods. So we feverishly got to work. The idea was simple, I, as a class teacher, would provide the children with the followthething bags, with the proviso that they bring into school the most exciting packaging from food they could find. Whether this was because it had come from far away or because it had a Fairtrade label on it, it didn’t matter because the tasks intention was to get the children to

become food detectives and excited about tracking their food. The next step was to compile all the packaging and create a list of the 10 most exciting. Ian would then research these products and expose some of the darkest secrets of the foods production, revealing all to the classes later in the week. With these shocking secrets uncovered, the children would be tasked with writing a response to the people involved in creating their food. This could be a postcard to a supermarket giant or to a 9 year old boy who works on the cocoa plantation. The intention was to harness children’s natural sympathies and utilise them as a tool for emotive writing.

Ian hurriedly went to work on the list, researching over a few days the human and other stories in MilkyBar buttons, Tesco’s milk and the humble Sainsbury’s steak pie. We both felt that these three followings had a logical flow and worked nicely together with lovely similarities and contrasts, which would sponsor feelings of empathy, anger, happiness and disgust. For the buttons, Ian talked about child slavery in the cocoa field of the Ivory Coast and how Nestle and other companies ‘may have tolerated child slavery on cocoa farms to keep production costs low’. For the milk, he talked about farmers in the UK being paid less for their milk thank it costs to produce. And for the pie, he talked about the horsemeat scandal and how processed cow parts end up in other foods – including sweets – in unexpected ways . The research Ian did showed the children that food production isn’t a humanless endeavour and there are real lives involved in producing your favourite chocolate buttons. We worked with four classes of Year 3 and 4 children. After Ian talked and the children’s questions were over, I asked them to sit at the tables and think about writing a

postcard to Nestle, Sainsbury’s, Abdoulaye the cocoa worker, or anyone else that Ian had talked about. Given what I has told them, what did they want to say or ask? By 3 o’clock, surrounded by 120 postcards, Ian and I had the unenviable task of sorting through lots of fantastic writing and picking out a selection to public here on the followthethings.com. Legibility was the initial acid test , but as we explored what the children has written we were surprised by the vast range of responses to the same ideas. It was wonderful to see the names of children, who usually struggle to find the impetus to write, on some of the most well thought out, sensitive pieces of work. We ended up choosing cards that, read in sequence, produced a kind of narrative arc. Even from something as innocent as a Milkybar button, we received a multitude of responses and reactions. It was really inspiring to see children so passionate and genuinely concerned for the wellbeing of someone they has never met before. It confirmed my belief that children have a natural inclination to be empathetic and that by exposing them to these strong emotional topics, they can produce some amazing work. We’re publishing online four series of postcards written by the children.

Here’s the first, where the children were expressing their concerns about child slavery in their chocolate. Click the image to get to the slideshow on flickr (and for typed out versions, if you can’t read the handwriting). 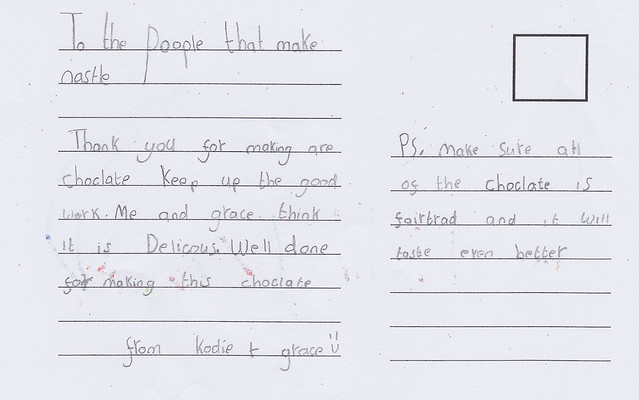 Here’s the second, where the children were expressing their concerns about horse meat being found in beef products, and their thanks to those supermarkets where it wasn’t. Click the image to get to the slideshow on flickr. 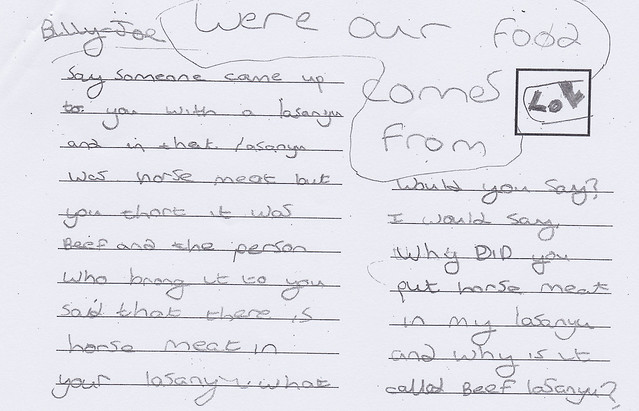 Here’s the third where, after hearing about the foods in which non-meat cow parts are ingredients, the children expressed their concerns and appreciation about beef gelatin in their favorite sweets. Click the image to get to the slideshow on flickr. 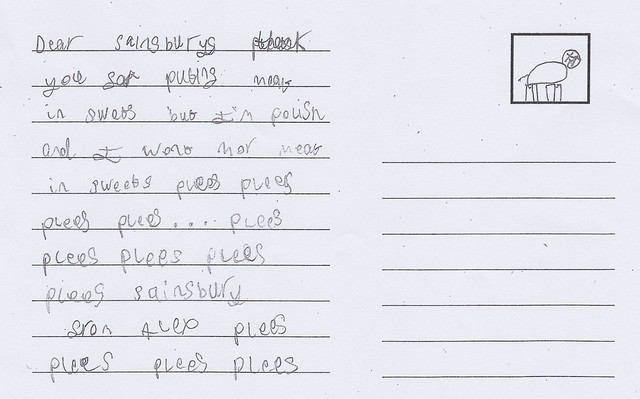 This exercise was such a success that Ian was asked by one child if there was more opportunity to be a food researcher! I see a junior followthethinger in the making! All in all it was a thoroughly successful day that I would love to repeat it again!